At the start of our Christmas holiday myself and the two friends I was travelling with decided to stop in Hanoi on our way to Laos, and I’m very glad we did.

Driving from the airport into the city of Hanoi, we saw our first sunset for – what we then realised – months.  Living in Shenzhen you are surrounded by many skyscrapers and various other tall buildings, which means you never see the sunrise or sunset and it is often difficult to see the stars, even if the sky is clear.  The first sunset of our holiday was beautiful, and a very welcome sight.  Sometimes you don’t notice you’ve missed something until you see it again.

We stayed in a lovely hotel called Rising Dragon Villa Hotel in the Old Quarter, where we were greeted with a cup of tea, a map of Hanoi and a very useful explanation of what’s best to see, where to go and what to do in the short time we had. After a bit of freshening up (although it’s only a two hour flight to Hanoi from Hong Kong), we set off to explore the Old Quarter. I really liked Hanoi. It was lovely to wander around; lots of little side streets lined with cafes, shops and eateries. We were told (by friends that have/do live in Vietnam) to be careful with our bags as bag-snatching and pick-pocketing can be a common problem, especially in the more touristy areas, however it felt quite safe to walk around (unless you were trying to cross the road!) and as long as you’re sensible about such things it should be fine. The traffic is another matter entirely. Motorbikes outnumber cars hugely and crossing even the smallest side road can be taking your life in your hands. Luckily I’ve lived in China for almost three and a half years, so I’m much more used to crossing busy roads when there’s the tiniest gap and assuming that the other vehicles will go around you. Having said that, I still found the number and noise of bikes on the road (and sometimes the path) slightly off putting.

After manoeuvring our way around the streets for a while, during which we of course had a tea break in a little cafe, we found a nice restaurant to have dinner and cocktails in. We later realised it was a tourist haunt because there wasn’t a single Vietnamese person in there who wasn’t staff. Ah well, it was still really good food at a reasonable price. Talking of price, another thing we had to get our heads round was the currency – 33,000 Vietnamese Dongs to the pound. Have you ever tried dividing by 33,000 in your head? It’s not easy!

Anyway, after some much needed sustenance we had a wander around the fairly substantial night market. Some good things – I bought a woolly bobble hat and a belt, and we saw some lovely cut out pop-up cards – but it was very busy and got a bit claustrophobic. This was very much the kind of place where a bag or purse could disappear easily if you weren’t paying attention for a moment. We managed to find our way back to the hotel with no problems (due to my amazing map reading skills!) and turned in to our free-upgrade, rose-petal strewn beds for a lovely night’s sleep.

The next day our airport pickup wasn’t until 4pm, which gave us most of the day to explore. After a good breakfast of pancakes and fruit, we headed to the Ho Chi Minh Mausoleum. The guards are quite strict – hats and sunglasses must be removed, no talking inside (all fair enough), but also make sure you keep up with the people in front of you! Basically you walk in, up some stairs, through the room Ho Chi Minh is displayed in and around the glass sarcophagus he lies in, lit up and surrounded by more guards in white formal uniform, then back out. It was quite odd to think that that was a dead person lying there; he didn’t look quite real, especially as the combination of the yellowy-orange lights and his white skin made it look like his face and hands were glowing. 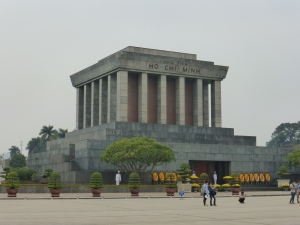 Following the mausoleum we walked round the presidential gardens and saw the mansion that Ho Chi Minh refused to live in and the two quite simple houses that he did live in (consecutively, not at the same time!). It was very close to closing time for lunch by this point, so we got a taxi to the Temple of Literature – the Confucian university and the first university in Vietnam, built in 1070. A lovely place and definitely worth seeing, although it was full of young men and women dressed to the nines having graduation photos taken.

Our last stop was at the Museum of Ethnology. I had no idea that Vietnam had so many different ethnic groups – 54 to be precise. The museum is an excellent showcase of the traditions, culture, clothes, music, livelihoods and housing of many of these people. They even have actual houses from different villages and in different styles in the grounds of the museum that you can go inside and look round. Unfortunately we missed a water puppet show while we were having a late lunch at the small restaurant in the museum (good food, good deserts, all prepared by students from the local cookery college); if/when I go back to Vietnam, that is definitely something I would like to see.

That was the end of our time in Hanoi. Next stop: Luang Prabang, Laos.