Laos greeted us with open arms, cups of tea and slices of watermelon. It was lovely. Myself and the two friends I was travelling with over the Christmas holiday had just arrived at Mekong Sunset View Hotel in Luang Prabang after a very short flight from Hanoi. We were also given a map and shown the best places to go, things to see and do and places to eat.

After depositing our luggage in our room, we set out on a mission to find food, as it was getting quite late by that point. We decided to try L’Elephant, as recommended by the hotel staff, and after a bit of a wander round and only getting slightly lost we found it. We got there just in time as the kitchen was about to take its last orders. Luang Prabang has a curfew; everything is shut by 11pm at the latest, the restaurants usually by 10pm, and we got there around 9.45pm. The food was lovely, although there was a bit of a mix up and my vegetarian friend was brought a chicken and sausage pastry dish. Unfortunately the kitchen had closed by this point, so I gave her my fish (which she could eat) and I had the chicken. It was nice for what it was, but not what I really wanted. But I wasn’t about to let my friend go hungry, especially at the end of such a long day. After dinner we took a slow wander back to the hotel via the river front, commenting along the way that we couldn’t wait to see it in the daylight and looking at the amazingly clear stars above us. 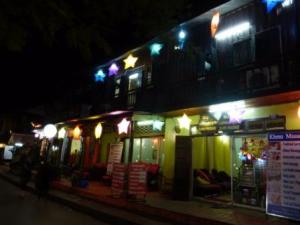 The next day began with a horribly early start as we had decided to watch the monks collecting alms at 6am.  We made our way to the road we had been told they walk along from the main temple at the top of the town and saw some people selling food to give to the monks.  We didn’t stop at the first people we saw but walked further up the road and found a local woman who seemed nice.  She put out a mat for us and told us to kneel down on the mat with our shoes off and stay that way to give the food – a pot of sticky rice and some small bananas – to the monks as they came past.  It felt slightly odd that she told us to give a handful of sticky rice to each monk, which we put in their bowls, rather than just giving the whole pot of rice and bowlful of bananas to one of them to be shared out.  The food they collect during this ceremony is all they will eat that day, and the youngest monks were at the end of the very long line, so presumably they will get the least food.  Having said that, none of them looking like they were starving or lacking for food.  There were some other local people out giving food as well, which made us feel a little better, but it still felt not-quite-right.  It wasn’t until much later that we read that you should only make an offering if it means something personal to you and the monks often throw away food given by tourists.  We did, however, do everything we could to be as respectful as possible, unlike one tourist/photographer who was running alongside the monks and getting uncomfortably close to them to get photos and called out to us to, ‘Keep moving, keep moving, they won’t stop for you,’ to get the best shots.  I’m glad I saw the traditional ceremony, but if I saw something like that again I would make sure I kept a respectful (and silent) distance. 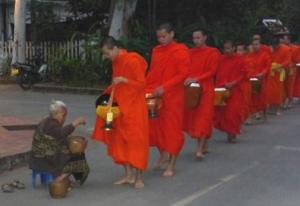 When we got back to our hotel we had a breakfast of a giant pancake with bananas, then chilled out and warmed up in our room for a bit before a nice wander along the river front (and yes, it was lovely), popping in the odd shop every now and then.  In one lovely shop I bought some mulberry lip balm and a couple of silk handmade hair scrunchies, and we all tried some mulberry tea which was quite nice (they had green tea and red tea versions, both quite refreshing). Next we came across Ock Pop Tok (which means East meets West), a shop and company that sells handmade silk, cotton and batiq products made by local people and nearby villages. They have a free tuktuk to their Craft Centre which we decided to take advantage of. After a short wait, we were driven through the town and out by Phousy market, down a little dirt road and ended up at a lovely location overlooking the river. We were given a free tour and shown the silk worms, weaving, batiq and dying processes, and also found out they do workshops where you can make your own place mat (1 day) or silk scarf (2 days), among other things. If only we’d had more time there, I would have definitely done that! 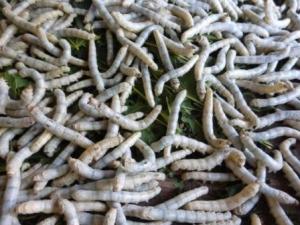 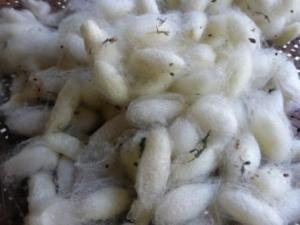 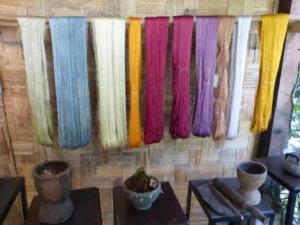 We pretty much immediately started making plans to come back to Luang Prabang later in the year so we can do all the things we didn’t have time for. Before we went there, we had no idea how lovely it would be or how much there would be to see and do. In hindsight, and if we’d known this before we went, we would have gone to Vientiane first (our next stop) and spent longer in Luang Prabang, including Christmas. Regardless of that it was still an amazing trip and we all enjoyed it, liking each place we went for different reasons, but I think we all fell in love with Luang Prabang. 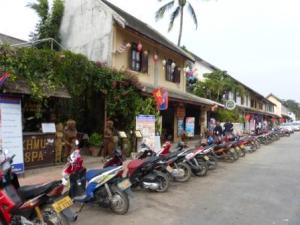 After our tour, we had lunch in the Ock Pop Tok restaurant, which was delicious, and then caught the free tuktuk back into town. The afternoon was spent looking round the Royal Palace and Museum, which was fascinating, and we got tickets for a traditional dance show that evening. With a couple of hours to while away between the Palace closing and the show starting, we went for tea and cake at a little cafe then took a wander down to Nam Khan river before heading back to the Palace. 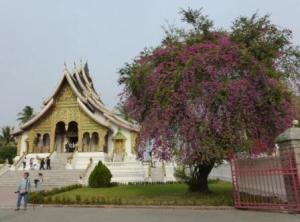 The dance was a traditional ‘ballet’ (although not what we know as a ballet), beginning with an Apsara dance performed by fifteen women in traditional dress.  Their movements were very graceful and precise, holding their heads, necks and torsos extremely still and moving only their legs, arms and hands.  This was followed by a dance called Phralak Phralam or Ramayana Lao showing the story of Hanuman defeating Thotsakhan (Ravanna), which was interesting but very long (myself and one friend ended up nodding off either side of our other friend!). At the end of the dance we had a brief opportunity to take photos of the cast, and although I got a few there were some Chinese tourists who decided to stand in front of the dancers to have their photos with them which meant that everybody else wasn’t able to get to get a decent photo.  Ah well, these things happen (wherever there are Chinese tourists!). 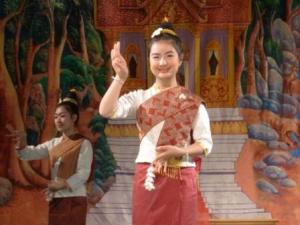 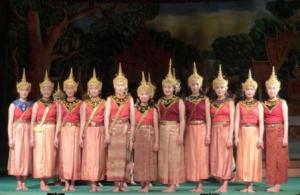 Dinner was bamboo shoots stuffed with tofu, breaded and fried with a spicy sweet and sour dipping sauce, at a restaurant called The Bamboo Tree overlooking the Nam Khan river.  Following dinner we wandered around the night market, although by then they were starting to pack up.  Despite this I still managed to buy two lovely scarves to add to my collection. 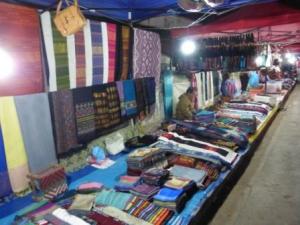 Our final day in Luang Prabang was mostly looking at lovely things, buying lovely things and eating lovely food. Once we’d checked out of our hotel, we’d arranged for a driver to take us to Kuang Si Waterfall.  Before we got to the waterfall itself there was a Sun Bear and Moon Bear sanctuary where you could see the bears wandering around quite happily.  We then spent about an hour walking along the banks of the river and marvelling at the falls before walking up the next section of path and repeating the whole experience, until we got to the end of the path and saw the huge falls at the top.  On our way back we stopped in a local Hmong village (one of the many ethnicities in Laos) and took a short walk through the village looking at the many handmade beautiful scarves, purses, bags and the like they had on small stalls along the path (quite obviously for tourists). I ended up buying two (completely different) scarves and a silk purse, and we then headed back to town.

Our lunch was a Laotian banquet at Tamarind restaurant (recommended in my Lonely Planet guide): bamboo and mushroom soup (with a hint of aniseed); three different jeow (dips that are a traditional part of any Laotian meal) – aubergine, tomato and a spicy one with buffalo skin; river weed crackers; cured buffalo meat (slightly sweet, a bit like honey glazed gammon); pork sausage; fish steamed with herbs and wrapped in a banana leaf; lemongrass stuffed with minced chicken and herbs; pumpkin with lemongrass and ginger; and for dessert, purple sticky rice with coconut and sesame seeds (it was warm and tasted a bit like rice pudding) and Laotian cookies with tamarind dipping sauce.  It was all really tasty (apart from there being a bit too much aniseed flavour in the soup) and it was really great to try some authentic Laotian cuisine, as I had no idea previously what Laotian food would be like.

We wandered around Luang Prabang for the rest of the afternoon, visiting a few of the temples including Wat Xieng Thong, the biggest and oldest temple in the town.  After a final visit to the Ock Pop Tok shop again to buy the silk scarf I first saw and loved there, we picked up a few supplies for the next part of our journey, headed back to the hotel to collect our things then were driven to the bus station to catch the overnight bus.