Siem Reap was lively and welcoming, an interesting mixture of modern and ancient. After seven and a half hours on the bumpiest mini-bus journey ever, myself and my two friends arrived in Siem Reap.  Our hotel was lovely.  They greeted us with a welcome drink and scarf, gave us a seat while they sorted out checking in, bringing things over for us to sign so we didn’t have to get up.  Our room was also lovely – the first time we’d had a bed each since Vietnam.

The evening was spent wandering around, looking at the night market, having food upstairs in a cafe looking out on the bustling street and having a foot massage while ladyboys practiced for their show that evening on a little stage at the back of the night market.

The next day – New Year’s Eve – was a long one.  We were picked up by our tuktuk driver at 4.45am in order to buy our entry tickets to Angkor Wat (big queues even though the ticket counter opened at 5am – I would recommend getting your tickets the day before if you can).  My other advice would be to bring a torch (flashlight) as it is completely pitch black when you’re walking through the grounds to the temple – I had no idea we were walking along a paved walkway across a lake with no railing or barrier! We got there in plenty of time to watch the sunrise; in fact we had enough time for a cup of tea too. There are plenty of stalls selling souvenirs, food, drinks and the like right by the pond in front of Angkor Wat.  Despite the early hour there were huge crowds of people gathered around the pond, all trying to get the best view. Most people tried to be considerate of others, although there were, of course, a few that just tried to push in front of everyone or stood up and got in everyone else’s way. Angkor Wat itself was amazing, but I have to say it was the most colourless sunrise I’ve ever seen, which made it a little disappointing. 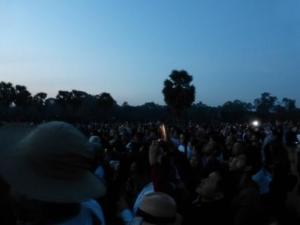 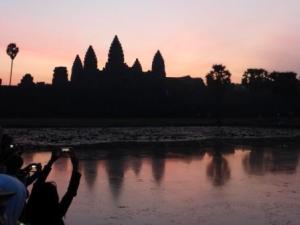 Angkor Wat is actually just one temple in a huge complex of temples.  You can get either a one day, three day or seven day pass to visit them all.  We had one day on our whistle-stop tour, which ended up being enough for us.  I almost lost count of the different temples we saw; by late afternoon we were completely templed out!  Each one was almost equally breath-taking for different reasons; there was the temple of a thousand faces; the temple engulfed by trees; and many more.  My favourite had to be Ta Prohm; the temple which has huge trees growing through the stonework. 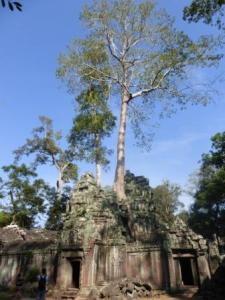 After a full day of temple hopping we were fairly worn out, so we headed back to our hotel for a bit of a chill out (and a cocktail) before the evening event – a ‘compulsory’ gala dinner at our hotel. At first we were a bit dubious about this, but it turned out to be a really good night.

The hotel had gone all out transforming a grass area into a stage, seating, tables and buffet with decorations and party hats on every table.  Entertainment was put on in the form of a traditional apsara dance, a peacock dance, Cambodian martial arts (which was a bit like Thai boxing), a band, dancing and games (pop the balloons and musical chairs which one of my friends won!).  We were all given a glass of fizz for the countdown, by which time we were all on the dance floor – staff and guests alike. 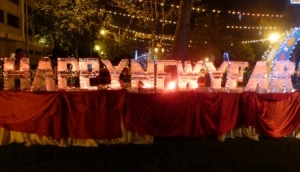 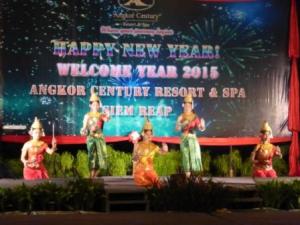 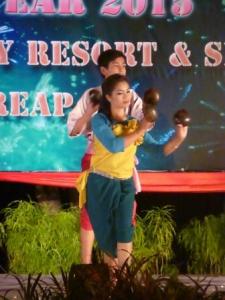 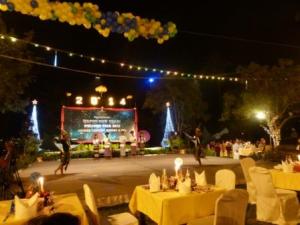 The party at the hotel ended fairly soon after midnight, so myself and one of my friends decided to check out the nightclub next door, ‘Titanic’.  They had a band playing songs we both knew well enough to sing along and dance to.  Somehow I ended up singing ‘I will survive’ with them!  After a lot more dancing we started chatting to a couple of guys who turned out to be friends of the band, and we managed to invite ourselves along to wherever they were going after the club closed at 2am.  What we didn’t know was that there are very very few places still open at that time in Cambodia, even on New Year’s Eve.  We ended up sitting at a little roadside stall with the band and their friends, where they very kindly gave us cans of beer.  It felt a little awkward but they were really friendly and made a real effort to talk to us and try and make us feel comfortable.  We didn’t stay long but decided it would be a good idea to go back to our hotel and get some sleep.

New Year’s Day was our last full day in Siem Reap.  After breakfast we went back to bed for a while to sleep off our hangovers (isn’t that what NYD is all about?!) then headed to Pub Street for food.  We had more of a wander around, explored the Arts Centre Night Market and while we were there got massages and manicures as a last treat before heading back to our hotel.

When we left Camodia and flew back to Hong Kong, we had a seven hour lay over in Ho Chi Minh airport.  It would have been lovely to explore a bit of the city, but it would have meant getting another visa and at a cost of £50 we didn’t think it was worth it for such a short time.  I’ll just have to go back to Vietnam another time to explore further!

Laos and Cambodia made for a lovely holiday, and I would definitely recommend visiting them both (although not too much, as I don’t want them overrun with tourists and spoiled!).