Once again the start of the week went well, and I managed to spend nothing on Monday. This was mostly because I stayed home from work with a bad stomach and only managed to eat a cheese toastie in the evening. All better now though! I think it must have been the street food scallops I had on Sunday.

My new aim is to try not to go over 1000rmb spending for the week, so I can eat out and see friends but only up to that amount. Let’s see if I can stick to that!

Tuesday friends came over and we watched Robin Hood Prince of Thieves, which we’d tried to watch the other weekend but the internet failed us miserably. Two friends ate before they came over and the two others ordered food. I resisted the urge to order pizza and instead and a portion of red pesto pasta that I’d frozen a couple of weeks ago. Point to me for will power!

On Wednesday I ended up having dinner with one friend then meeting some others for a few drinks and the local pub quiz at The Brew, one of whom I hadn’t seen since before Christmas. It was really nice to catch up and not worry too much about limiting the number of times I go out.

The only money I spent on Thursday was 4rmb for two vegetable baozi for breakfast plus the taxi home from work. This should have been just under 20rmb, but there was a car crash (only one car and the driver looked ok) which blocked the junction to where I live, so the taxi driver had to go a really long way round instead and it ended up taking twice as long and costing almost twice as much. After this I was tired and grumpy, and the last thing I felt like doing was cooking. However, after a bit of thought about what I have at home and could make quickly and easily so I wouldn’t order takeaway, I ended up cooking pasta with broccoli, sweetcorn and peas, and a mushroom sauce. I made enough for three portions so froze one and kept the other for lunch on the weekend.

Friday was drinks with one friend and dinner with another at a great Thai restaurant called Very Siam in OCT Loft. I got the metro there and back, so transport only cost me 5.7rmb rather than the 40-something-rmb it would have been to get a taxi both ways.

The best thing this week with regards to my No Shopping Challenge and getting rid of stuff I don’t need was going to an exchange evening on Saturday. This was run by a local group called Green Foot International Group (you can find them on WeChat under that name), which organises events such as hikes with litter picking and beach cleaning. This is the third exchange evening they’ve done and it was very successful. I dragged two of my friends along, as they’re also doing a sort out, but none of us were sure what to expect. It was held at a restaurant not too far from where we live, and once we found the place it all went really well. We started the evening by all introducing ourselves, then we had dinner together. This consisted of delicious Chinese food such as grilled aubergine, egg fried rice with raisins and pistachios, string mushrooms with garlic butter, broccoli and cauliflower with cheese sauce, and rice cakes with beansprouts and fried egg. Split between us and new friends the total came to around 40rmb (£4.50) each. Once we’d finished eating and chatting, the exchange part of the evening began. The initial idea was for everyone to show what they’d brought individually, but me and my friends had brought so much that we thought it would take much too long (and be slightly embarrassing) to do it that way. In the end we spread everything that would fit out on the tables, the idea being that everyone could take what they wanted and whatever was leftover would be taken by volunteers to local people who could use it. I took four bags with me, mostly of clothes and some shoes plus a few random items like a feather boa, spare phone charger, jewellery I never ware and various other bits and pieces. We were all amazed at how much was taken by other people, and it’s so good to know that your unwanted things are going to be used by someone else rather than just thrown away. I will definitely go to the next one of these they organise, and now I know what to expect I’ll try to get more people to come too. 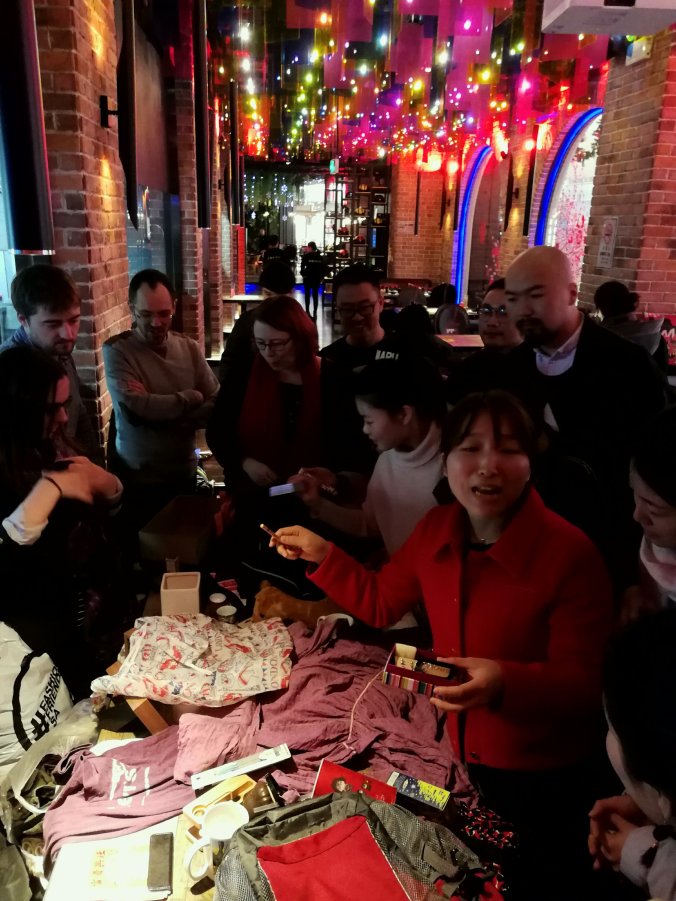 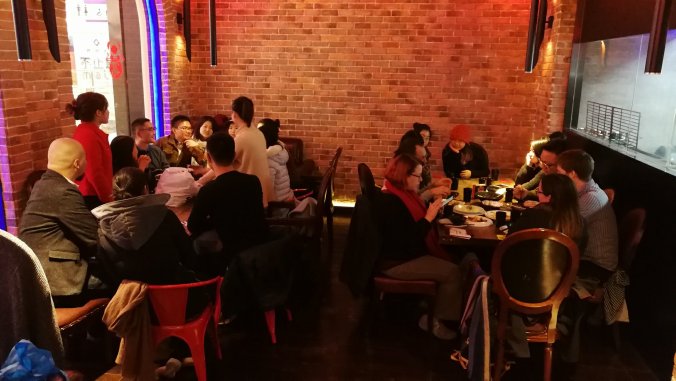 I also went out for a friend’s birthday after the exchange night but only bought one drink (mostly because they’d run out of wine (Oh the horror!), but still) and walked home (not far) instead of being lazy and getting a taxi.

The week ended with a chilled out day working on my secret project, catching up watching Will & Grace and trying out a new tv show called Altered Carbon, which I quite enjoyed. The evening was spent playing various board and card games with friends and drinking mulled wine (it’s really cold here at the moment!), which was great fun and we all were crying with laughter at one point. My only cost here was getting there and back.

My grand total for the week is 996.2rmb (£112)! I managed to stick to my budget but still go out and see all my friends who I wanted to, plus I didn’t buy any stuff or even get anything for free at the exchange evening. My No Shopping Challenge is going well so far. Things may well change when I go away next weekend, but we shall see. I’m still going to stick to my no buying stuff, although I’m going to relax my eating out and doing stuff budget while I’m away. Next time I post I’ll be in New Orleans for Mardi Gras! Can’t wait!