A huge lake that seemed to stretch all the way to the sky greeted us upon our arrival in Sambhar. Only a two hour drive from Jaipur, Sambhar Heritage Resort has two locations – one in the town of Sambhar and one the other side of Sambhar Salt Lake, the largest salt lake in India. We got a little lost finding the resort but we made it eventually and had our breath taken away by the stunning views across the lake.

Shreyans, the manager, welcomed us to Sambhar Heritage Resort. We were given a drink of fresh guava juice with a rim of salt from the lake, and then shown to our rooms which were Swiss tents. 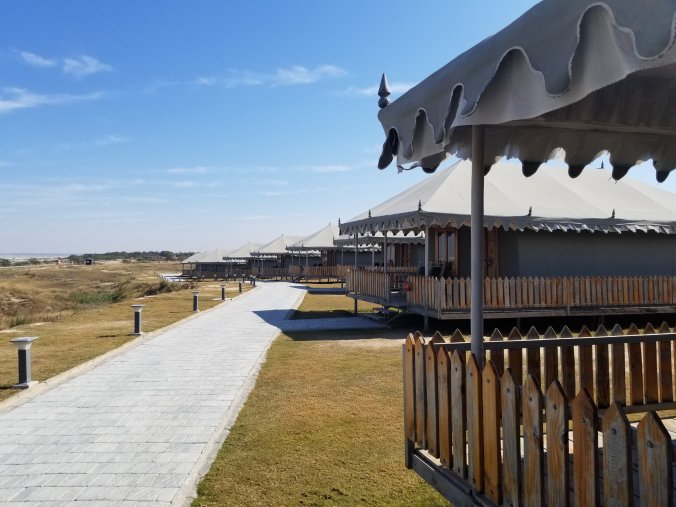 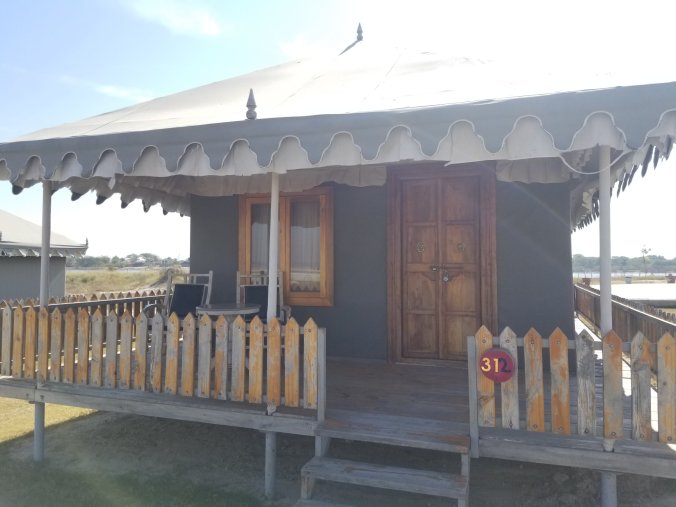 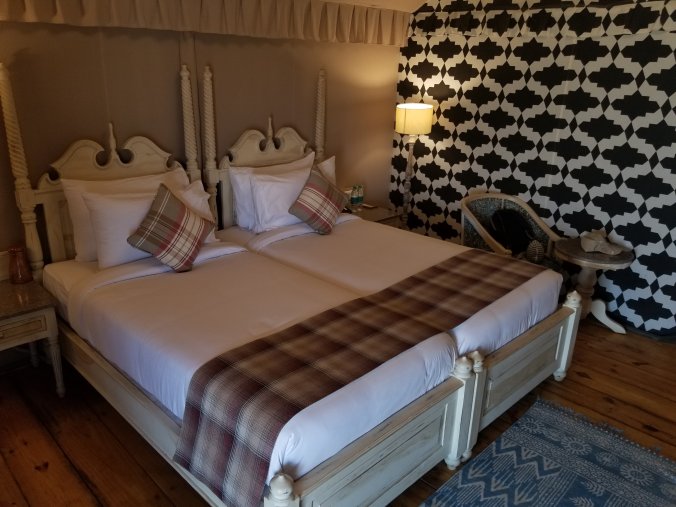 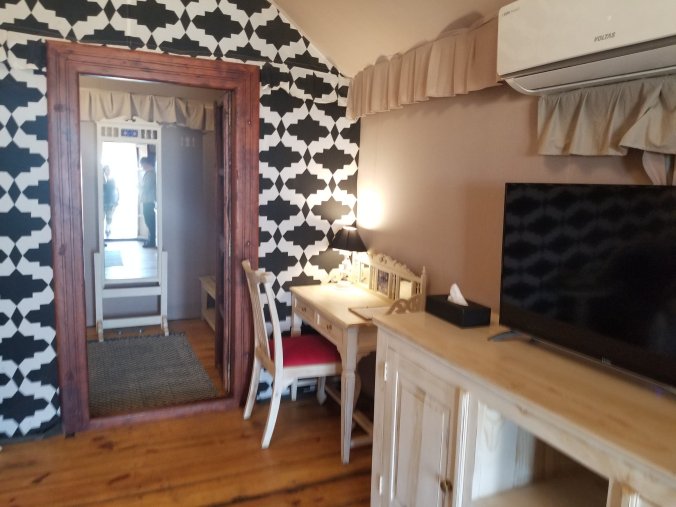 The resort rooms are all tents because the land is owned by the government and so permanent structures are not allowed to be built there, other than those already there. One such building is the resort restaurant, NaCl, which is 150 years old and was built by the British. We had a delicious lunch in NaCl and around 3.20pm we set off for our local tour. 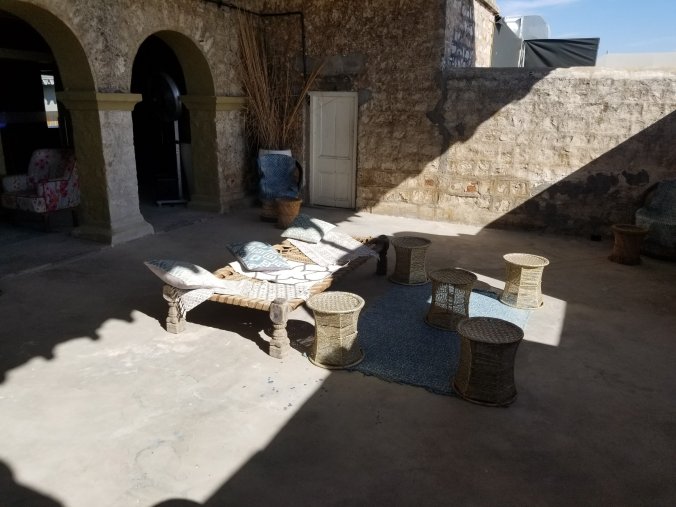 We were asked if we’d rather drive along the road or across the lake, to which we said definitely across the lake! As it’s dry season the water level in the lake is lower than usual and so it’s possible to drive across part of the lake bed as a shortcut to the other side. We stopped for a few minutes to admire the view and look at the flocks of flamingos through the binoculars Shreyans had considerately brought with him for us to use. 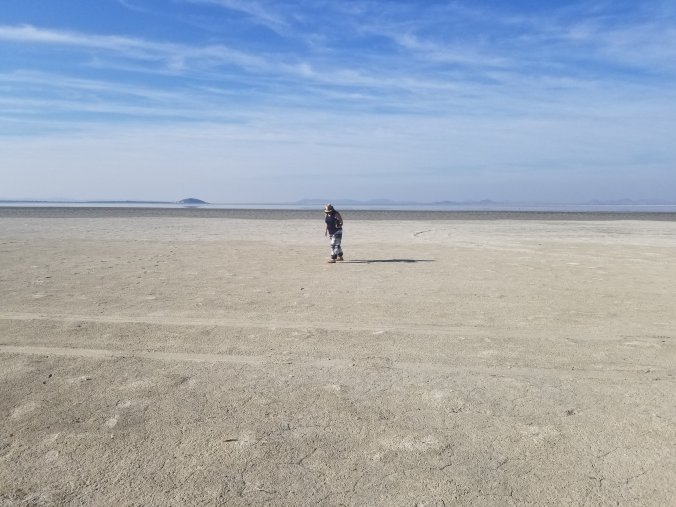 As we continued on our way we saw a few nilgai which is the largest of the Asian antelopes and whose name means ‘blue cow’. The females are brown and the males are a blue-grey colour. We got quite close before they bolted.

Sambhar Salt Lake is 9% salt with a maximum depth of only 3.5 feet and is about 90 square miles. In comparison the ocean is usually around 3.5% salt.

Across the curve of the lake we reached a small peninsula. Here we visited Shakhambari Temple, where there are Indian records showing there has been a temple here for at least 2000 years.

In the temple we were blessed by the priest and each given a red bindi, our first of the trip. We then climbed up to a viewpoint where we had a 360 degree view of the lake and the hills behind. 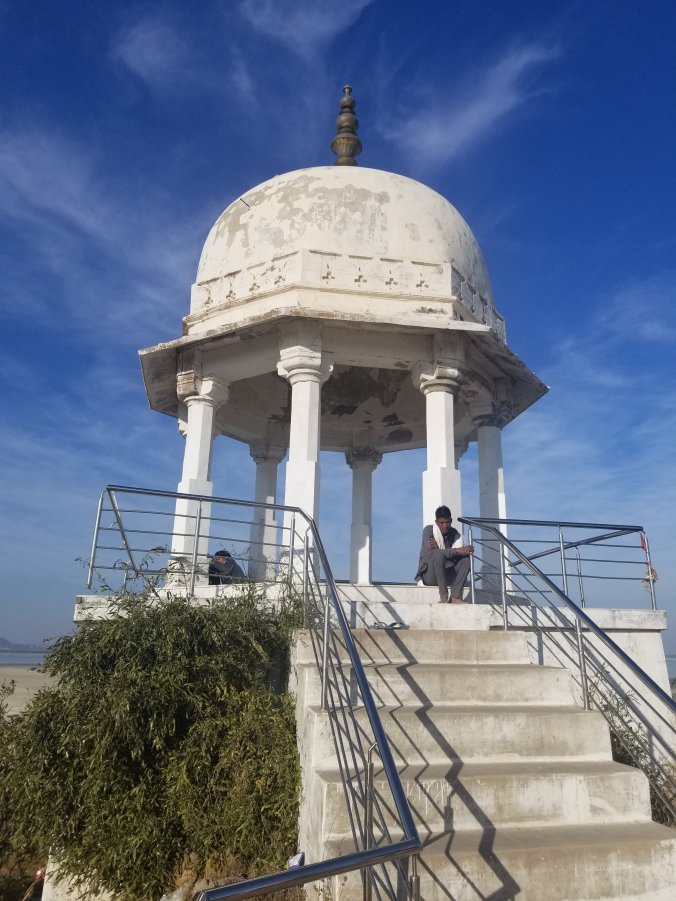 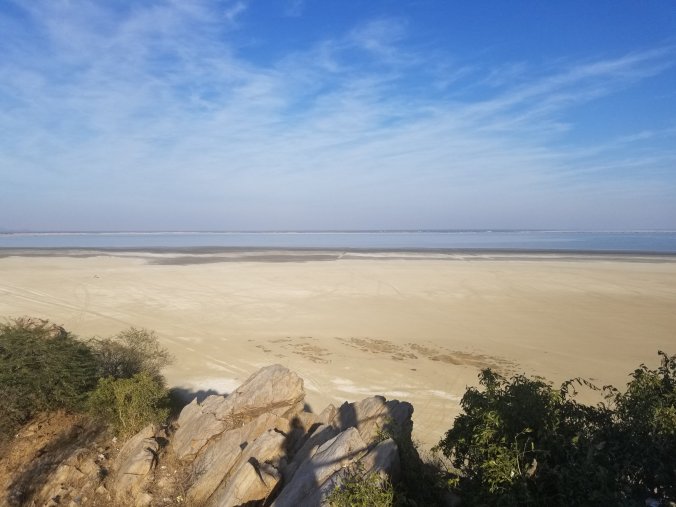 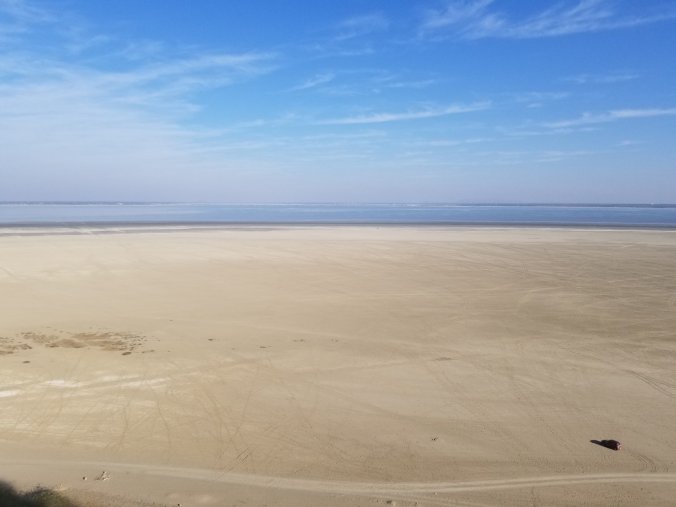 In this part of India Marwari is the local language and only a couple of the staff at the resort speak English. Shreyans’ English was excellent, which may be why he was our main contact and guide while we stayed in Sambhar.Once we’d had our fill of the views we drove back through a local village and to a small shop, encountering a few local animals on the way.

We went back to the resort where we picked up bicycles so we could cycle along the dam across the lake. After a rather bumpy ride Shreyans showed us agood place to stop and watch flocks of flamingos fly overhead while the sun set. It was beautiful. 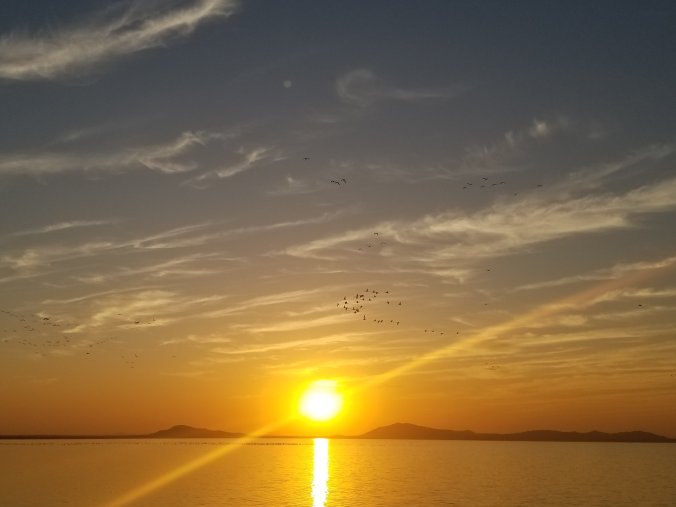 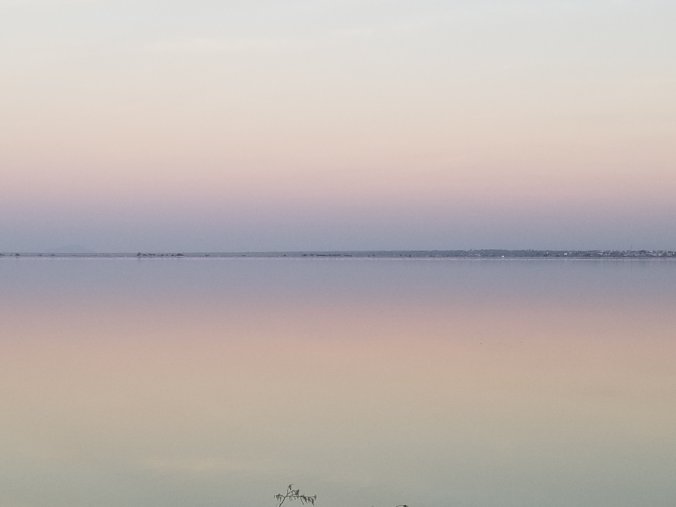 We cycled back to the resort, and my bike chain came off for the second time whilst Toby’s bike broke completely; he got a ride on the back of the motorcycle Shreyans had ridden in on the back of, while he walked back with Toby’s broken bike.

We had a few minutes chilling out in the room then met around 7pm for dinner, which was included in our tour package. We had an Indian feast! To start we had vegetable, noodle and coconut milk soup followed by an appetiser of tikka paneer. We then had palak paneer, mushroom curry and dal, accompanied by garlic naan, saffron rice and salad. This banquet was finished off with a hot carrot pudding, which was interesting in both flavour and texture. I quite liked it but the others weren’t so sure! 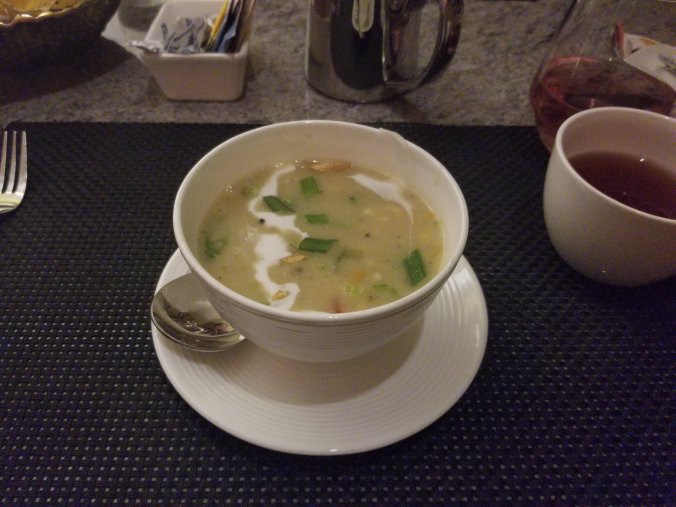 We ended the evening playing Monopoly Deal with a couple of glasses of beer (or Bacardi breezer in my case) in Jo and Nikki’s room, before a very quiet night’s sleep interspersed with the sounds of wild animals.After a breakfast with all of the food, we went on a tiny train that seats only six people plus staff. It’s around 100 years old, stopped working in the 1970s and was renovated in the last couple of years to be used as a tourist attraction. It still has the same engine as when it had originally. It was used initially by the Britishers and engineers to check on the salt production. They always had to have five people on the train (three in the driver’s cabin and two in the back) as when they got to the far end the train had to be physically picked up and turned around to go back again! So for safety, we also had to have five people as well as us in case the train needed to be picked up and turned around.

We rode the train out to the salt pans, with a short stop for the points to be manually changed. The colour of the water, and the stillness was incredible. 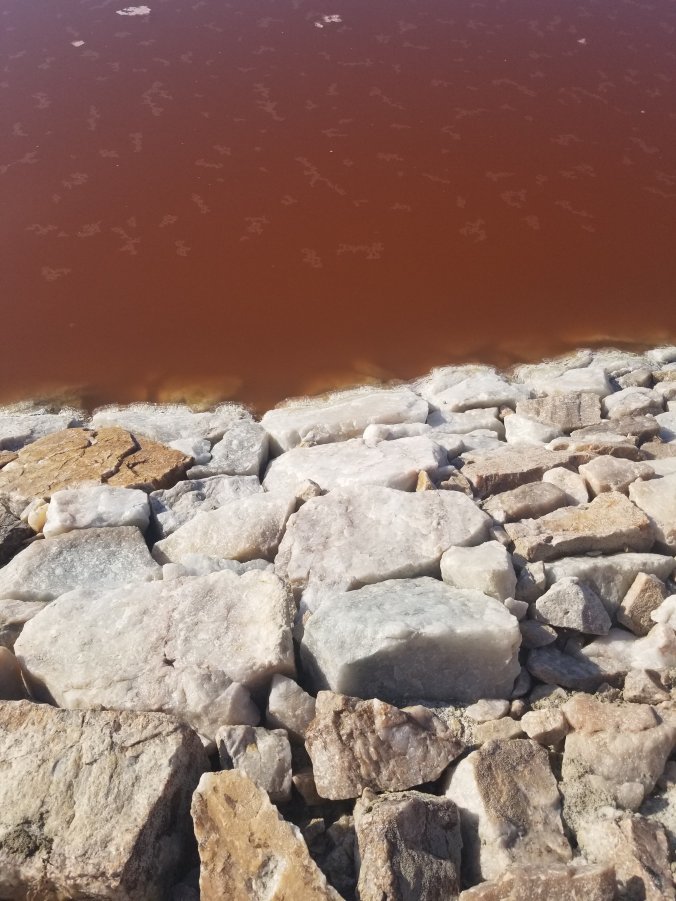 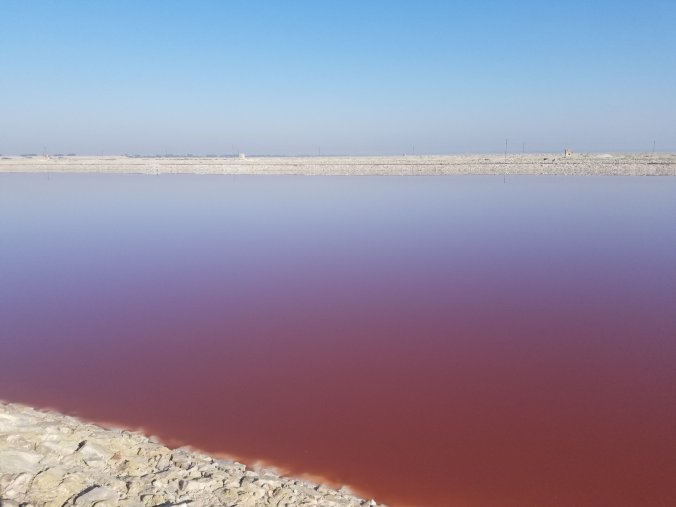 At the salt pans water is pumped from the lake to the salt pans to a depth of 3-3.5 feet. It is left for about three months didn’t which it evaporates down to about 1-1.5 feet. Salt crystals form on the surface and once they get to a certain density they sink to the bottom. You can literally put your hand in the water and scoop out a handful of salt crystals. 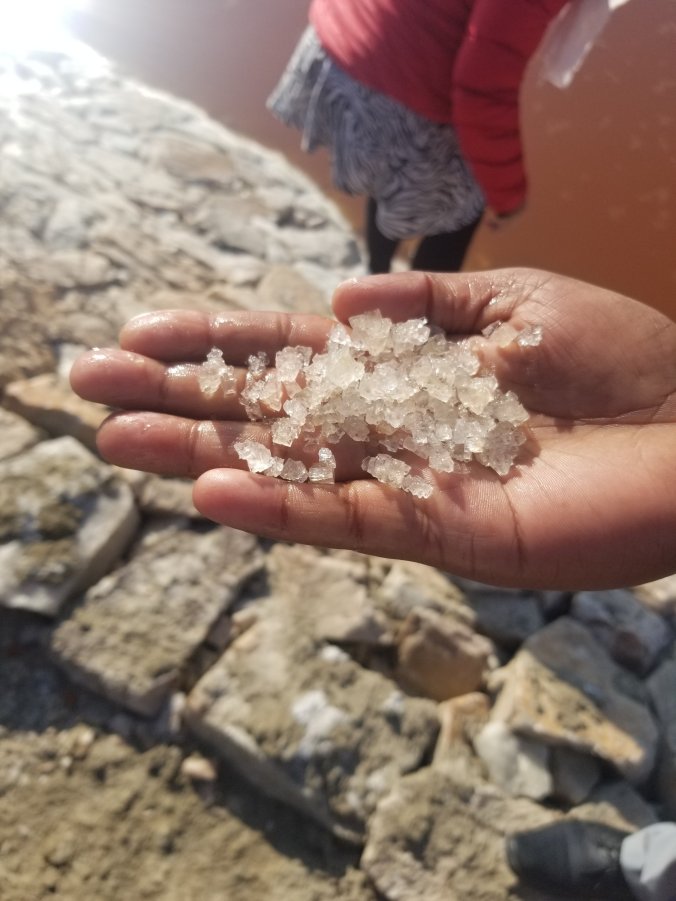 The larger pans use tractors to scoop out the salt crystals, the smaller ones in town are done by hand. Once the salt has been removed the remaining water is pumped out back to the lake. This left-over water has a very high bacteria content which means algae grows well which attracts the flamingos to the lake. Workers then remove the top layer of soil in the bottom of the pan by hand, add a fresh layer of soil then pump fresh water in from the lake and the whole process starts over again. Start to finish it takes around 3.5 months. As this is a government enterprise the salt is sold at only 5 rupees per kg. This is very cheap as most companies sell their salt for 12 rupees per kg.

We stopped out by the salt pans while the manager Shreyans explained the process to us, and then waited while the workers collected some fresh salt to give us. 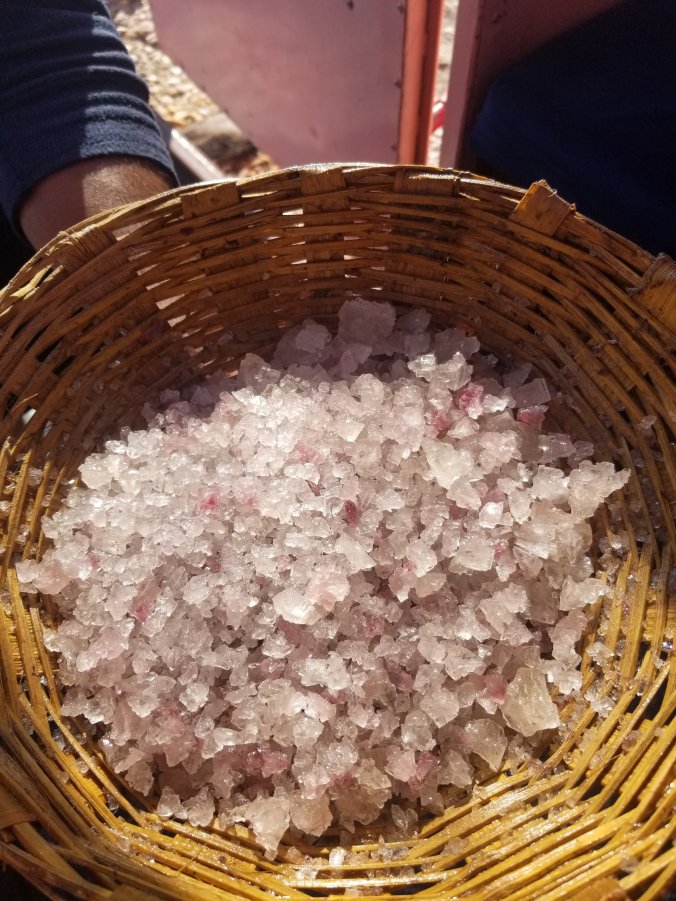 There are 32 or 33 salt pans here and they produce 10% of the salt consumption for all of India. Sambhar salt is just for Indian consumption, it isn’t exported as mostly Himalayan salt is exported from India.This was our final experience in Sambhar, and absolutely fascinating. We were each given a small pot of the salt that had been collected for us to take home. A perfect souvenir before setting off for our next stop, Jodhpur. 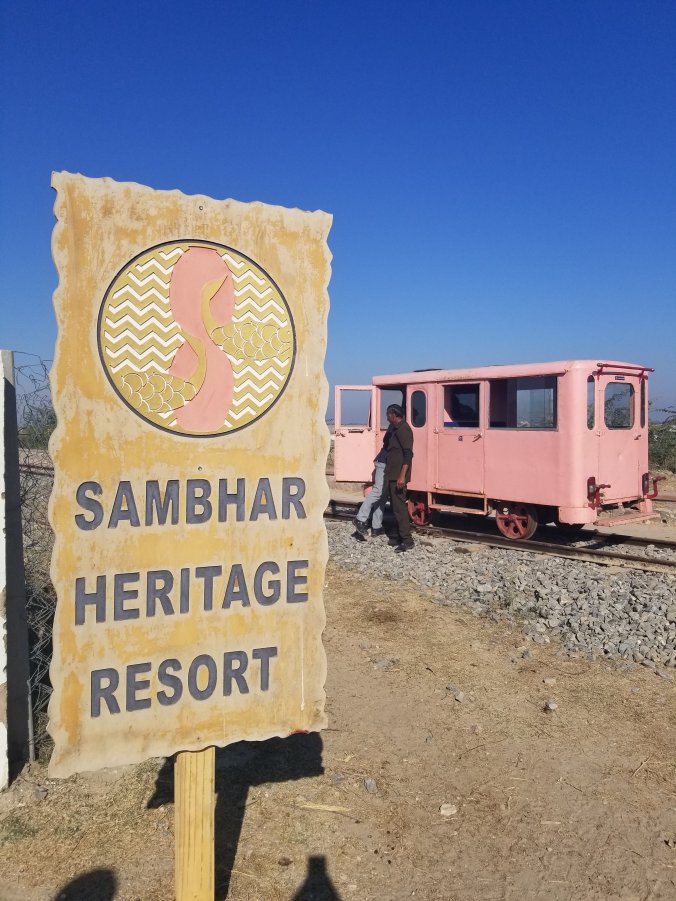